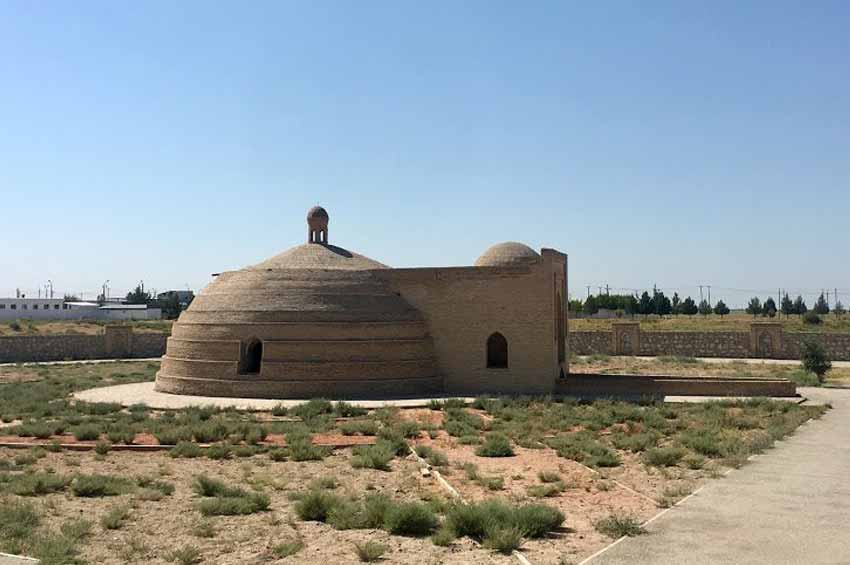 I had passed through Navoi Region many times before I stopped for the first time. This isn’t uncommon: the high speed Afrosiab train races through, as does the main highway between Samarkand and Bukhara, two of the most famous UNESCO sites on the Silk Road. I had seen the Rabati Malik caravanserai and Rabati Malik, its attractive domed water reservoir, from the window of the bus and the car, but beyond that I had rarely given a thought to Navoi, a territory which covers a quarter of all Uzbekistan. Now, all that has changed. When someone asks me where they can get off the beaten path in Uzbekistan, and how they can discover something new, Navoi is the first word out of my mouth.


For 10,000 years or more, Navoi has been occupied by man. At Sentob and Sarmysh, thousands of petroglyphs attest to the fact that the region’s inhabitants were a creative lot. The stick figures carved into the rocks are dancing as well as hunting. The diversity of the wildlife they depict reveals the richness of Navoi’s natural history, and they can be dated quite accurately as we know from paleontological finds when certain species went extinct here. Some of these ancient artworks are right by the roadside and easily visible; others are the reward awaiting visitors in stout footwear prepared to scramble along gravelly goat tracks and hoik themselves up cliffs. I hiked to the Sarmysh site from the nearby Sarmyshsay Mountain Resort (www.sarmishsoy.uz), where you can stay in traditional style yurts (albeit improved with en suite bathrooms) between the trees, and after dark watch energetic performances of Uzbek song and dance.

We know that Alexander the Great crossed Navoi during his conquest of Central Asia almost 2,500 years ago. His fortress at Nurata stands imposingly above the holy shrine, Nurata Chashma, and from the top you can see clearly why this was chosen as a strategic location on which to build. Alexander’s engineers understood the importance of a fresh water supply for their garrison, so they also built a koriz, a sophisticated subterranean water channel to bring drinking water from the mountains to the fort. You can still see the channel’s pits through the fields of nearby farms, and plans are afoot to properly excavate and restore the koriz as a tourist attraction.

Navoi’s medieval sites are inevitably better preserved than their ancient brethren, and despite (or perhaps because of) their proximity to Uzbekistan’s UNESCO World Heritage cities, they receive hardly any tourists at all. At the Nurata Chashma, I met only pilgrims and local wedding parties who’d come to the sacred spring for a blessing and to have their photos taken with the elegant background of the mosque. The shrine here is peaceful, and showcases some of the crafts for which Uzbekistan is renowned: glazed turquoise tiles and carved wooden pillars in particular.

In Karmana, the historic settlement bordering modern Navoi City, two places captured my heart with their beauty and sense of peace. The Kosem Shaikh Mosque is decorated with the floral blue and turquoise tilework for which Uzbekistan is rightly famed, and besides a class of local children on a school trip and one cute but very yowly kitten, I had the complex to myself. This is never the case in the UNESCO cities, and I revelled in the chance to sit peacefully beneath the stunningly painted ceiling, reflecting on the journeys pilgrims have made here through the centuries.

It is only a short drive from here to the Mir Said Bakhrom Mausoleum, a simple mid brick structure with architectural similarities to the Samanid Mausoleum in Bukhara. Here again it was quiet: only an elderly guardian patrolled the grounds, and he smiled in welcome as I arrived.

To visit the historic sites of Karmana, plus the vast and vibrant Navoi Bazaar, I stayed at the Grand M Hotel (www.grandm-hotel.uz) in Navoi City. It is conveniently located, and run to the standards of an international business hotel. The air con is much appreciated in the heat of summer.

Leaving the city behind, I headed out once again to rural Navoi, this time to the Sentob Valley, which is blossoming as a hub for ecotourism in Uzbekistan. Amongst the vegetable gardens and orchards, villagers have set up guesthouses and homestays, offering visitors a taste of rural life. It’s a complete contrast from the more hectic pace of life in urban areas, and fascinating to see.

I watched matriarch Rahima baking bread in her open sided tandor oven, and ate non whilst it was still piping hot. Rahima’s children and I danced together, serenaded by a pair of musicians who live nearby. I walked along the shaded river bank, where there’s an historic well and also the mausoleum of Hazrati Eshon, one of eight saints from Bukhara. Like at Sarmysh, there’s an extensive gallery of petroglyphs in Sentob, and on the mountainside above is the ruins of an abandoned village more than 2,000 years old. Archaeologists believe that one of the structures in this ancient settlement was a Buddhist temple, but as with so many ancient sites in Uzbekistan, many more lifetimes of excavating are required to excavate all the secrets hidden below the ground.

The joy of travelling around Navoi Region are its contrasts with the great UNESCO cities. Here, you see authentic rural life as well as urban civilisation. There are monumental Silk Road structures and religious buildings, but you can enjoy them quietly, without crowds. You have the option to swap hotels for yurts and family homes, and to walk upon desert sands, mountain paths, and beside lakes instead of on paved streets. To visit this fascinating area is to see and appreciate another side of life in Uzbekistan, and as such it enhances any tour.