Uzbekistan and the Gallery of Forbidden Art 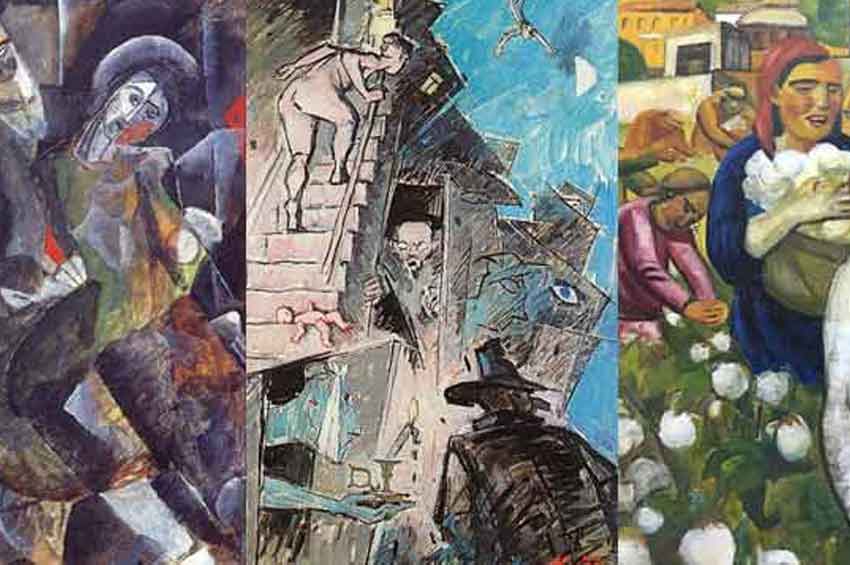 The legacy of the artisans who built the Registan in Samarkand, the tiled minarets of Khiva, and countless other glittering monuments at the heart of the Silk Road, lives on. Visitors, understandably, may be drawn to this fascinating Central Asian country by the relics of the past, but every new generation of citizens continues to express themselves in the creation, collection, and curation of art. Artists know that a picture tells a thousand words, and that our collective creative output is a reflection of the society in which we live.


I boarded a flight in Tashkent, Uzbekistan, and flew another two hours west to Nukus in the Autonomous Republic of Karakalpakstan. A desert state in Central Asia, remote and sparsely populated, you’re forgiven for having previously overlooked it.

Nukus is low rise; a few public buildings stand side by side with faded Soviet apartment blocks, and now and then there’s patch of park amidst the concrete. Driving through the streets early in the morning, there’s little sign of life. The city’s Chemical Research Institute was decommissioned and the Aral Sea fisheries are long since closed, but the significant gas reserves beneath the desert and a relocated Chevrolet car plant are just about keeping the local economy afloat. At first glance, it’s an unremarkable place.

The last thing you’d expect to find in Nukus is one of the world’s foremost art collections. But there it is, the Karakalpakstan State Museum of Art named after IV Savitsky, dominating the central square with its striped facade and a glass pyramid atop the roof.

Igor Savitsky -- a Soviet electrician turned artist and collector -- first came to Karakalpakstan in 1950. He fell in love with the landscape and was fascinated by Karakalpak culture. He convinced the Karakalpak authorities they needed a museum in which to showcase regional arts and crafts, but also to display paintings which would inspire the next generation of Karakalpak artists. Savitsky bought carpets, costumes, and jewellery; archeological finds and plaster copies of Classical sculptures; and also the drawings and paintings of artists linked to Central Asia. He developed an almost obsessive interest in Uzbek Avant Garde art and, by extension, its Russian counterpart.

Artworks of this kind had already been banned for three decades. In his 1932 decree On Restructuring Literary-Artistic Organisations, Stalin outlawed Avant Garde styles such as Constructivism, Cubism, Futurism, and Neo-Primitivism. Artists were blacklisted, imprisoned, and unable to sell or exhibit their art. Paintings were destroyed. The state wanted every vestige of this art wiped out.

“The Karakalpak authorities had some awareness of what [Savitsky] was buying,” explained Mirigul Erekeeva, the museum’s Head of Exhibitions and Education. “They didn’t agree with it but couldn’t say no.” Savitsky was adamant that Karakalpak art should be collected and viewed within the wider context he envisioned, and as Nukus was both a closed city and far away from Moscow, he got his way. There was just one occasion when he was asked to remove a work: Vladimir Lysenko’s The Bull was deemed unacceptable by visiting government officials. Savitsky took the painting down in a show of obedience, waited for them to leave, then returned it to its rightful place.

The Bull is a curious piece, and stood in front of it I could see why it made the officials uncomfortable. Savitsky named the work Fascism Advances in a bid to obscure its meaning, but there’s no escaping the bull’s shotgun-like eyes -- symbolic of repression -- which seem to eat into the soul of the viewer. Lysenko had studied under Kazimir Malevich, and, like his teacher, was purged. He was arrested, denounced, and spent six years imprisoned in a mental asylum. Only six of his artworks survive, all of which were discovered by Savitsky, purportedly having been discarded in the artist’s attic.

The unearthing of such a treasure might sound like a miracle, but we have to look at it in context. Savitsky amassed around 80,000 works. He acquired everything he could find, regardless of whether or not other curators would consider it noteworthy. He bought artworks with museum funds and with the proceeds from selling his own possessions. He won the trust of widows, took paintings from artists for safe keeping, and when he had no funds left, he swapped artworks for IOUs. Consequently, the museum now has more than 1,000 paintings and sketches by Nikolay Tarasov, 1,600 graphics by Arkadiy Stavrovskiy… the list goes on.

Erekeeva’s knowledge of the artists is encyclopaedic. She barely drew breath as we worked our way through the galleries. I learned about Alexander Volkov, father of Uzbek Avant Garde, who experimented with Cubism and Constructivism; Alexander Nikolaev (also known as Usto Mumin), who was fixated with painting boy dancers and arrested for his sexuality; and Nikolay Karakhan, who was fed up of painting tea houses and caravans, and turned to scenes of construction and farm workers instead. Mikhail Kurzin’s hideous Capital required some explanation: at first it seems the aristocrats are oppressing a tortured proletariat, but that’s only part of the story. It’s also only part of the painting. A photostat copy in the KGB archives reveals the work was originally much larger. The missing part -- probably cut out by Kurzin himself -- showed a self portrait of the artist beside prisoners in the gulag.

The Savitsky Collection is priceless; a single artwork by Volkov would exceed £2 million at auction, and the museum has the largest collection of his paintings in the world. And it’s not just the financial value of the art which must be considered. “There are wonderful artists people have never heard of, including many women,” commented Charlotte Douglas, professor of Russian art at New York University, “and great works from artists we thought we understood but now realize we don't.” The government added two new buildings to the museum complex in 2017 so that more of these previously unseen works could go on show, and to improve the storage and archive facilities.

Savitsky saved the paintings once already, but his collection is still under threat. “The biggest challenge right now is restoration: it’s very urgent,” worries Gulbahar Izentaeva, the museum’s Director. “We don’t have qualified restorers. We did have a restorer, but she is 85. We dream of sending our restorers to Moscow to train.”

Help, thankfully, is on its way. The Arts and Culture Development Foundation under the Ministry of Culture of Uzbekistan appointed a new Director with international experience in 2019. “We can use the methods of Tate Britain, Tate Modern here, but we need a concrete plan,” notes Erekeeva. The new Director will be tasked with developing and implementing that plan, with four key priorities: modernising the museum; upskilling staff; introducing advanced museum management technologies; and raising the museum’s international profile. Only once in the past decade have paintings from the collection been exhibited abroad, but there’s a huge community of museums desperate to exhibit them and to help continue Savitsky’s legacy by celebrating his forbidden artists.