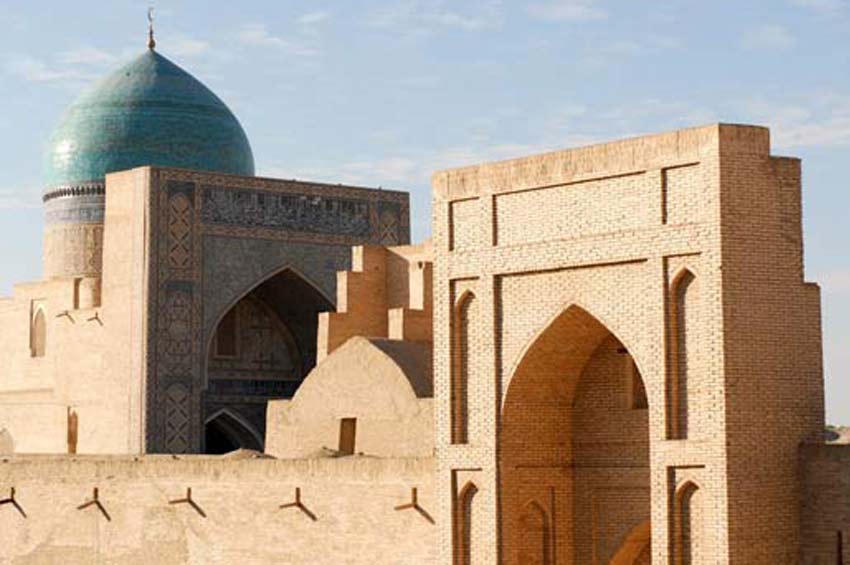 What happened to the Lost Tribes of Israel? Where did the descendants of Napthali and Issachar go? Perhaps they travelled east along the Silk Road; maybe they settled in the land where the Prophet Job struck the earth with his staff and water miraculously spurted forth. Bukhara was sacred long before the dawn of Islam, the city shaped by the cult of Anahita, Mizrahi Judaism, Manicheanism, and Nestorian Christianity. Dazzling mosques, madrassas, and mausoleums might today dominate Bukhara’s skyline, forming the archetypal image of Uzbekistan, but they are built upon a rich foundation of diverse spirituality.


Bukhara was one of the most important religious centres of the medieval world, second only to Baghdad as a place of religious learning and theological debate. The Persian scholar Imam al-Bukhari -- best known for collecting the hadiths (the sayings of the Prophet Muhammad) -- was born here, and so too were the philosopher, astronomer, and physician Avicenna (widely regarded as the father of early modern medicine); and Bahauddin Naqshband Bukhari, founder of the Naqshbandi, the largest and most influential order of Sufism.

My plan for discovering Bukhara’s sacred sites began at the Chashma-Ayub Mausoleum (The Well of Job), but on my way through the park to find it I became distracted by a curious cubic structure topped with a dome. Built in the late 9th century, it is one of the few ancient buildings in Bukhara to have survived destruction by Genghis Khan and his Mongol horde.

Made of baked mud bricks and unadorned with mosaics, carved stucco, or other colourful ornamentation, it would be easy to walk on by. But this is the mausoleum of Ismail Samani, a powerful Persian ruler of Central Asia. The architectural styles and motifs syncretise Zoroastrian and Islamic conventions, reminding us that for centuries these religions coexisted along the Silk Road. The fact that the king had a mausoleum at all is also significant. Orthodox Sunnism prohibited their construction over burial places, so this building is a statement that the Samanid Dynasty was prepared to depart from the strictures of the orthodoxy and instead practise their religion as they pleased.

The Chashma-Ayub Mausoleum is a short walk further on, and despite its name, it isn’t a mausoleum at all. Three cities -- al-Shaykh Saad in Syria, Urfa in Turkey, and Jabal Qara in Oman -- all claim to have Job’s body; the unusual conical dome here simply covers a well and, latterly, Bukhara’s Museum of Water Supply. Legend has it, however, that Job miraculously found water here in the desert, and that water has healing properties. Believers still come here to sit and pray.

Across Bukhara -- the Old Town of which is now protected as a UNESCO World Heritage Site -- tourists and pilgrims mingle, often indistinguishable from one another. In the Poi Kalon square, there’s a third group -- the scholars and teachers of the Mir-i Arab Madrassa -- who are a rare sight in Uzbekistan today.

80 years of Communist rule destroyed almost all of Uzbekistan’s religious institutions; even when the buildings survived intact, they were often converted for secular use. The Mir-i Arab Madrassa is the notable exception. It was the only religious education centre in the USSR still functioning after WWII, and thus all the region’s leading Imams had to study here.

Uzbekistan’s modern state permits religious freedom, but does so warily. Around 90% of the population is nominally Sunni Muslim, but the active practise of religion is not encouraged. Religious organisations must be licensed, and the requirements that madrassas and other religious schools must meet in order to gain registration are particularly arduous. There are strict penalties for participating in unlicensed groups and producing and distributing unsanctioned religious materials. The government’s fear is that without such restrictions, foreign backed extremist groups would rise and threaten the stability of the state, as they have done in neighbouring Afghanistan and Tajikistan.

Part of me wanted to step inside the Mir-i Arab Madrassa, to find out how this 500 year old educational institution was surviving in the current, quite challenging, context. It’s prohibited for visitors to cross the threshold, however, and I respect that: yes, it is an historic monument of architectural and cultural interest, but first and foremost it is a place of religious study and prayer. I therefore contented myself with a stroll across the square into the Kalan Mosque, built to accommodate 12,000 worshippers. Some 288 stone pillars support a similar number of domes. A team of workmen were hammering away at the stonework, the conservation of which is surely a never ending task. Other than the workers, it was empty. It is simply a mosque-museum. No one preaches here now, and the vast open courtyard no longer hosts prayers.

I felt a certain amount of frustration. This was Noble Bukhara, Holy Bukhara, and I was left with empty buildings and shadows of the past. Taking time out over a bowl of tea beside the water tank at Lyabi Hauz, I asked Leonid Danilchik of Veres Vert for recommendations. Where could I find living faith in Bukhara? Where do the pilgrims still go?

I knew that what I sought must be here somewhere. This is, after all, the country the BBC described as the “land of a thousand shrine”, a place that draws pilgrims of many faiths (and none). Abdulaziz Aqqulov, the deputy head of the Uzbekistan Tourism Committee, estimates that 9 million Uzbek citizens -- almost one in three people -- performed a pilgrimage last year, the vast majority of them within their own country.

Leonid smiled when he heard my questions. To him, the answer was obvious. The holiest site in Uzbekistan (and arguably in all of Central Asia) is the mausoleum of Bahauddin Naqshband, in a complex 12 km outside Bukhara.

Bahauddin Naqshband was born here in 1318, and in childhood he was adopted by a Sufi Khwaja, a spiritual teacher and guide. Naqshband became the 17th link in the silsila, a chain of teachers stretching directly back to the Prophet Muhammad, and he founded the Naqshbandi, the largest and most influential spiritual order of Sufism. The Naqshbandi spread from Central Asia to India, Russia, Syria and Palestine, and even as far east as China. Its adherents still return to Bukhara in large numbers to pay their respects.

I took the bus to the mausoleum complex, and covered my head with a shawl before entering through the arched doorway in its blue tiled portico. There wasn’t a souvenir seller in sight, nor a spot of dust or sand. The paving had been swept until it was spotless.

The main courtyard was an oasis, with shaded patches beneath the roof and calming blue-white-green tiles decorating the walls in panels. Naqshband’s tomb was off centre, and beside it stood a second, more ornate structure believed to have healing properties. Around the walls, lines of Uzbek pilgrims sat on benches or stood quietly, listening intently to the rumbling sermon of an Imam. Unlike in the grand mosques, there was no minbar on which he could stand and preach. The Imam instead stood beside the worshippers, speaking to them directly not in Arabic but in their colloquial tongue. Every now and then there would be a prayer, and the pilgrims would pass their palms across their faces in a mark of utmost respect.

I sat a while and watched, enjoying the sense of peace and humbled by the pilgrims’ genuine devotion. At a suitable break in proceedings, I wandered on. Behind the courtyard I found the complex’s hauz, its reservoir for drinking water. On its surface was the shivering reflection of a mud brick minaret. The huge, dead trunk of a mulberry tree lay beside it, somewhat incongruously. I was told that if you make a wish -- in particular one for a child or a return to good health -- and can squeeze between the bark and the ground, your wish will certainly come true. This is what I had hoped to find, the intermingling of Islam and folk traditions which typify the richness of Sufism and can still be part of ordinary life.

It is said Naqshband went on Hajj to Mecca no fewer than 32 times, a remarkable achievement in any age, but even more so in the 14th century. His followers needn’t travel so far: it is said locally that if you walk three times between the centre of Bukhara and his grave, that pilgrimage is equal to Hajj in the eyes of God. Just as with the construction of the Ismail Samani Mausoleum more than a thousand years ago, Uzbekistan’s are still flying in the face of the orthodoxy. This only makes the holy sites of Bukhara all that more beguiling.

EXPLORE BUKHARA FIRSTHAND
WHEN Uzbekistan is most enjoyable in the spring and autumn months, when the days are warm and bright.
WHERE Bukhara is 437 km southwest of Uzbekistan’s capital, Tashkent, on the edge of the Kyzylkum Desert.
HOW Fly to Tashkent with Uzbekistan Airways, then book high speed train tickets and tours through Veres Vert.